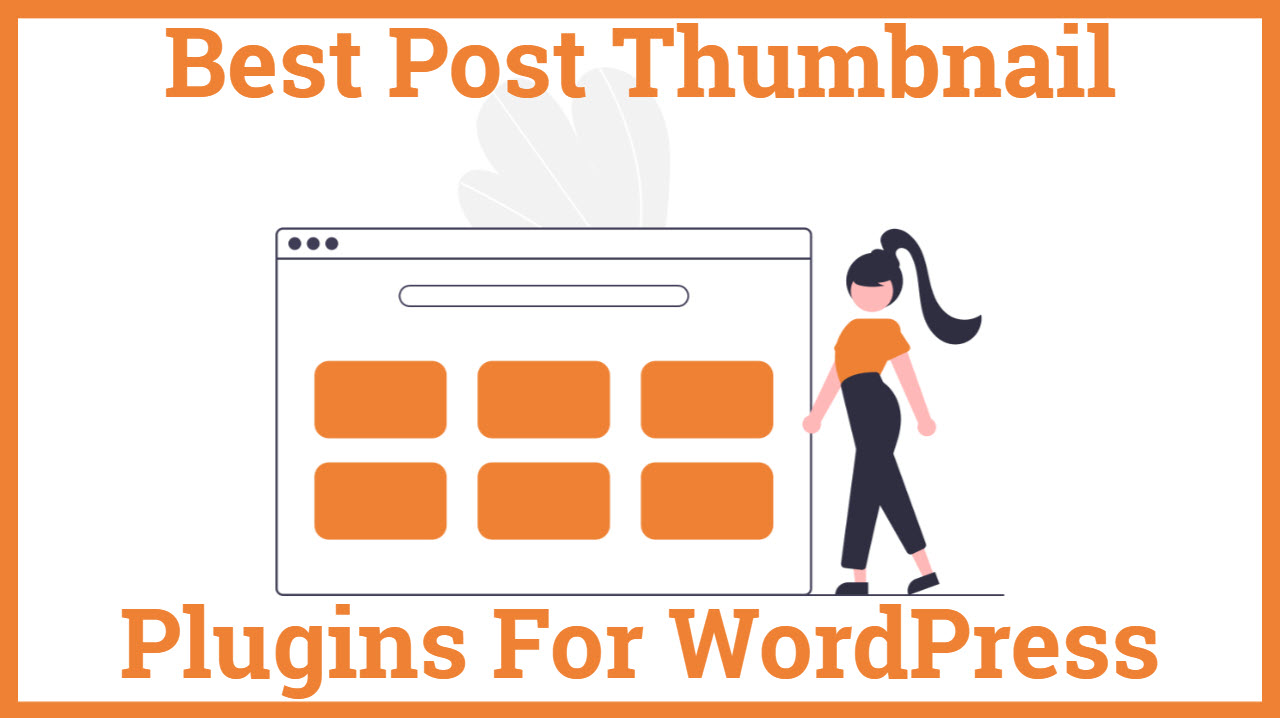 Are You looking for Best Post Thumbnail Plugins For WordPress? Feature images are really for us to attract the visitor. For getting beautiful images stock images you can visit this page and keep Your website traffic engaged.

Now there are different ways to get feature images on your website. some people Auto Post Thumbnails using one of the below-mentioned Plugins. Some people add feature video as the video thumbnail for post and some people want multiple post thumbnails. Even when you changed the WordPress theme you need to regenerate the post thumbnail to get the perfect size for your post. Because when you change the theme the feature image of the old theme doesn’t match with the new theme.

Regenerate Thumbnails is a well-oriented WordPress Plugin for creating thumbnails in several sizes of one or more images available on the site. Let you prepare thumbnails that easily appear high-quality images on different devices in eligible frame sizes accordingly. If you carry different sizes of thumbnails of available images on the site then you may easily see your image anywhere. Regenerate Thumbnails assists you to collect featured images from different themes that you added to your site.

In case you have created a thumbnail in different size and however, you need the past size of that thumbnail. Then you don’t have to be worried as Regenerate Thumbnail creates various sizes of thumbnails of images and then upload them on Media Library from where you get to access any of them whenever necessary. Such an intuitive and lightweight plugin for a thumbnail that also lets you delete unnecessary thumbnails to free up storage on the server. The old and unused thumbnails can be removed from the website. The content of the posts can also be updated so that new thumbnail sizes can be used. 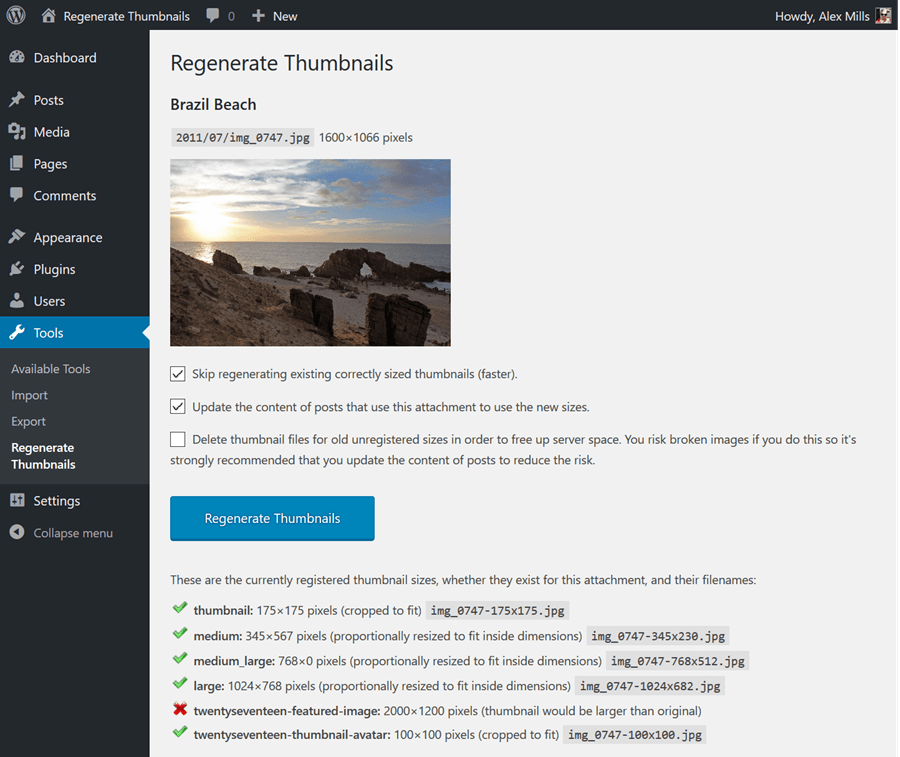 Dynamic Featured Image is developed so well to create intuitive thumbnails for available images on the website. Multiple featured images can be added to a post, page, or custom post types using Dynamic Featured Image. .  Provides a better user experience that delivers high-quality featured images within perfect scaling of size. Let you create one or more thumbnails for any particular image and save the same on WordPress Media Library. Such multiple thumbnails functionality can be configured so well for various posts, custom post types, and pages. Without the need for any knowledge of coding, an interface is provided by this plugin to add any number of featured images. For one or more images that have been uploaded to the Media library, Regenerate thumbnails helps to regenerate thumbnails of all sizes.

Dynamic Featured Image contains simple UI that does not require coding for accessing thumbnails. Simply install it and get started with thumbnails creation shortly within a few clicks. Supports multiple sites which enable you to manage the thumbnails functionality of another website from the same place. Let you activate or deactivate your multi-site connectivity whenever necessary. Just remember before deleting this extension you need to deactivate it for sure from every WordPress network where you activate it. Then various theme functions collect these featured images. Network Activate can be used to activate plugins for all sites with only a single install. This feature is only available on the network admin site. The site on which the user is currently can be activated by Simple Activate. Activation or deactivation can be performed on any blog.

The video providers which are not supported can be added by using an embed code or HTML. The video mode can be changed. The look of the providers’ video player which is the most prominent can be changed. The video sizing can be changed and autoplay or video looping can be turned on. The videos dynamically adjust to the parent’s container size and width by default. The videos can be brought to the page in three ways. Presets can be defined for automatic default featured images. Accurate rules can be set based on properties. The plugin helps to save time by: 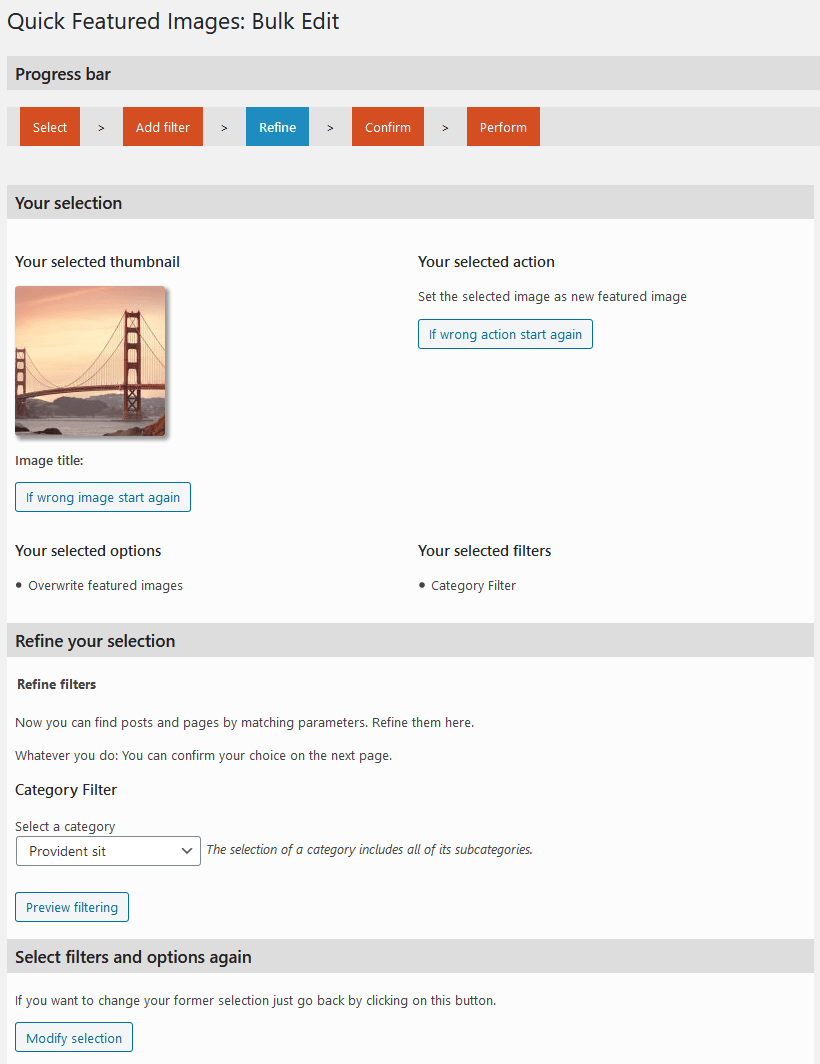 Multiple Featured Images plugin helps to add more than one featured image to posts, pages, and custom post types. Multiple featured images can be enabled for all post types and images can be shown with a handy shortcode or a widget. There are various featured video display modes that can be switched using a button in the sidebar. They are Automatic, lazy, and overlay. Local videos, as well as videos from external providers like Vimeo, DailyMotion, and YouTube, can be used. 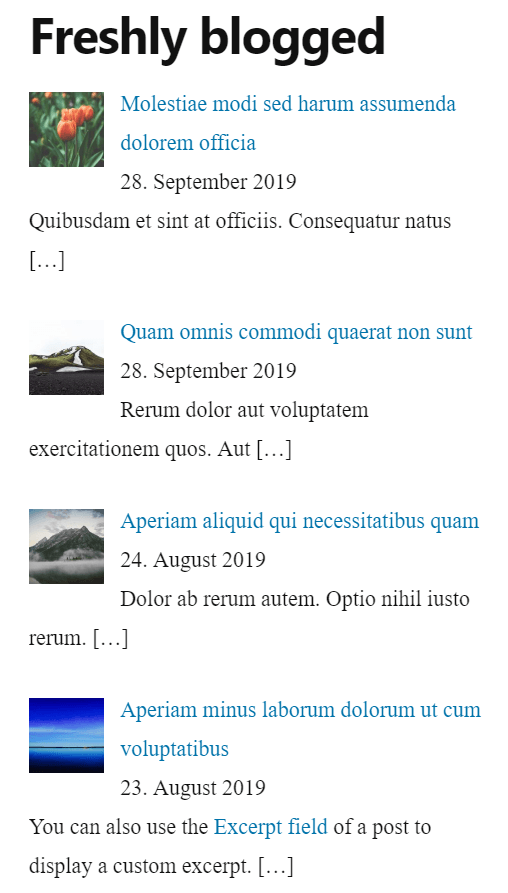 Featured Image Admin Thumb is a well-diverse WordPress plugin that manages the thumbnail functionality of the WordPress site so efficiently. Featured Image Admin Thumb plugin helps to add a column to all posts, pages, and custom page type( wherever it is supported) admin views when it is activated. Let you insert multiple thumbnails to any post or page for displaying the pixel-perfect existence of images thereon. You also get to know if any featured images are missing as it displays the thumbnail of such images there.  A thumbnail of the featured image is displayed by the column “thumb” or post thumbnail. This helps to determine missing images content. Inline edits can also be made which allows changing thumb/image, without editing the post, from all posts, pages, and custom post types. It is easily translatable.

Featured Image Thumb enables you to inline edit for modifying the thumbnail that is pre-existing on posts, pages, and custom post type. For making such inline edit you don’t need to edit the entire post you can simply make it through this extension dashboard. Provides a user-friendly interface that easily can be accessed by anyone without having coding knowledge. Easy to configure and manage thumbnails with smooth compatibility of various existing themes and plugins. Availability to translate into another required language for global existence.

Featured Image Column allows the user to select the post types that they want to have the image column in. A column is simply added before the title. The posts’ featured images are shown if it exists and if it is supported. In order to change the default image, the user’s own image can be filtered using featured_image_column_default_image. Or by using the  featured_image_column_css filter hook, the user can filter their own CSS. Also to change the size of the image, the user’s CSS can be added. 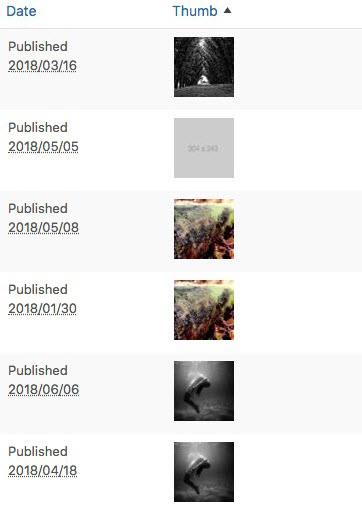 Thumbnails from other popular video services can be created using this plugin if a video is found embedded in the post. This theme feature of Post Thumbnails was introduced by Version 2.9 of WordPress. With version 3.0 of WordPress, it was changed to featured images. So post-thumbnail has now become a featured image which is an image chosen as a representative image for WordPress. Some of the features of this amazing plugin are: 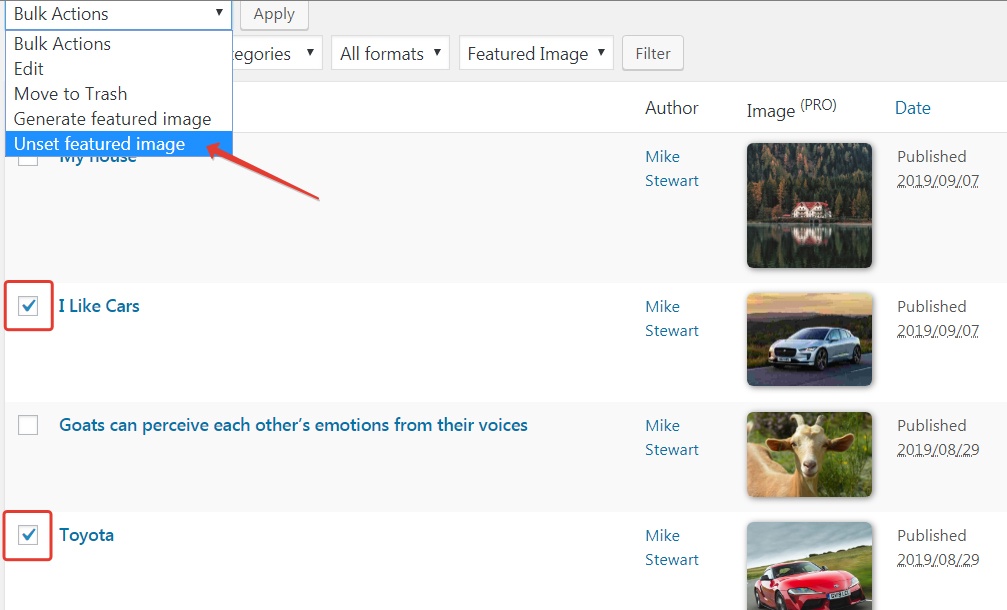 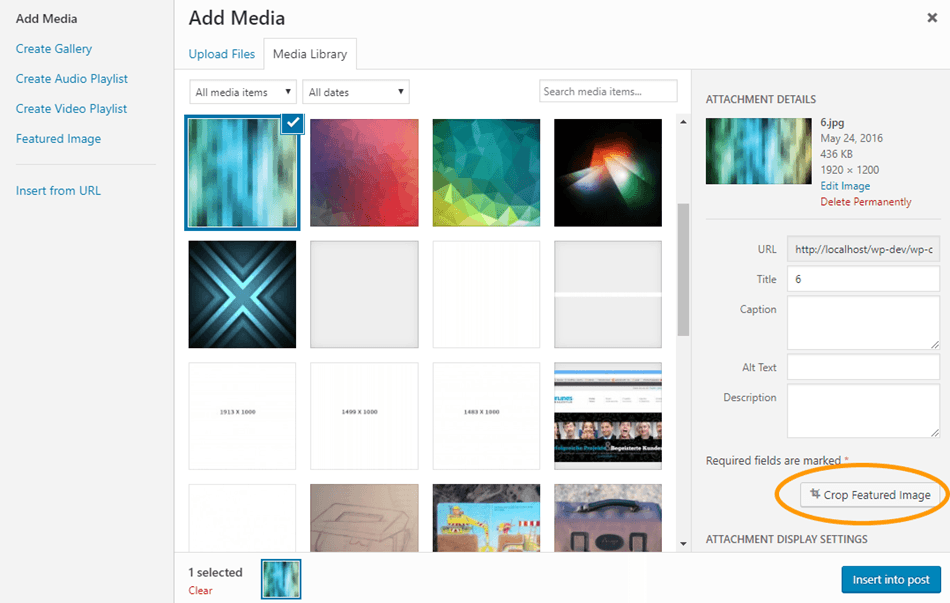 Need feature video for your WordPress posts? Normally when you are running a Facebook campaign or Twitter promotion visitors will not get much engaged when you are using images thumbnails so for them you can add video as your feature image. To automatically display video thumbnails in the template, Video Thumbnails helps its users. The first video which is embedded is found by this post while publishing a post and then a thumbnail is retrieved. Media Library is the place where the thumbnails are saved and then automatically added as featured images. Custom fields and custom post types are also supported. Widescreen cropping, maximum image sizing, customizable upload directory, more powerful bulk scanning, etc are provided in its pro version.

If the theme displays them then there gets double featured images. Since the plugin works on filters, if the theme is switched to one in which featured images are supported on single views, the plugin can be deactivated and then everything goes back to as it was. The database does not store any information. No special images are additionally generated in the Featured Image. The plugin may have reduced any content loss that may occur if it was made as a material for WordPress core. Then t would have had more effect on existing content. Featured images can be hidden/displayed or removed from all posts or from single posts. They can be set to display in only some specific posts or pages. So to do this Remove Featured Images helps the developers and users. 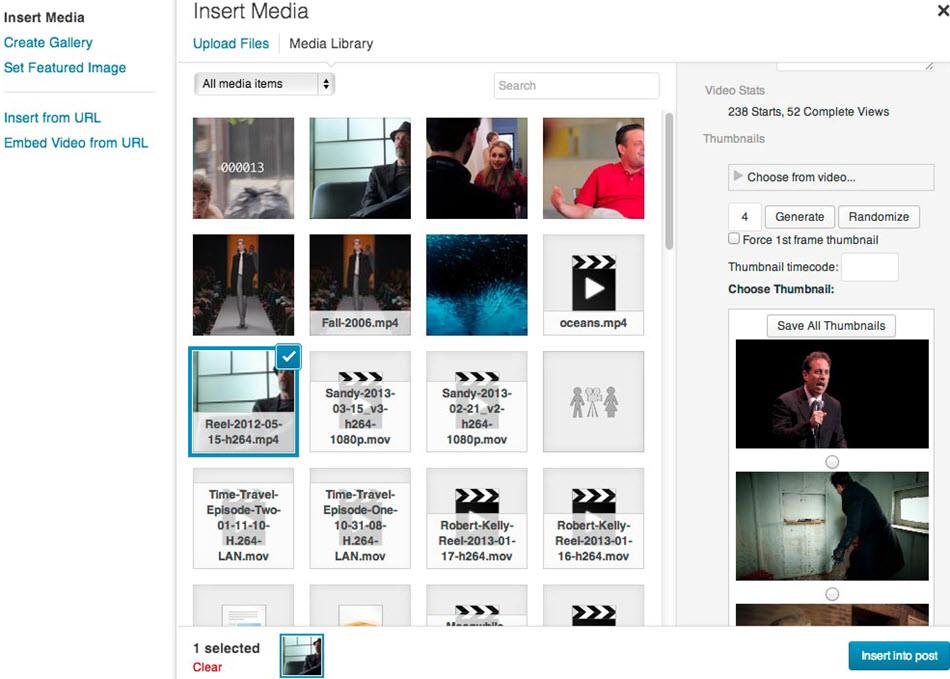 WordPress Real Thumbnail Generator is intuitively designed for re-generating thumbnails into Media Libraries of different sizes. A fast and secure extension for managing the thumbnail functionality so well. Either regenerate thumbnail one by one or in bulk however you prefer. Hereby, you can configure the customized uploading structure of the thumbnail accordingly. Real Thumbnail Generator is a chunky regeneration that accesses 33% faster than any other post-thumbnail plugin. 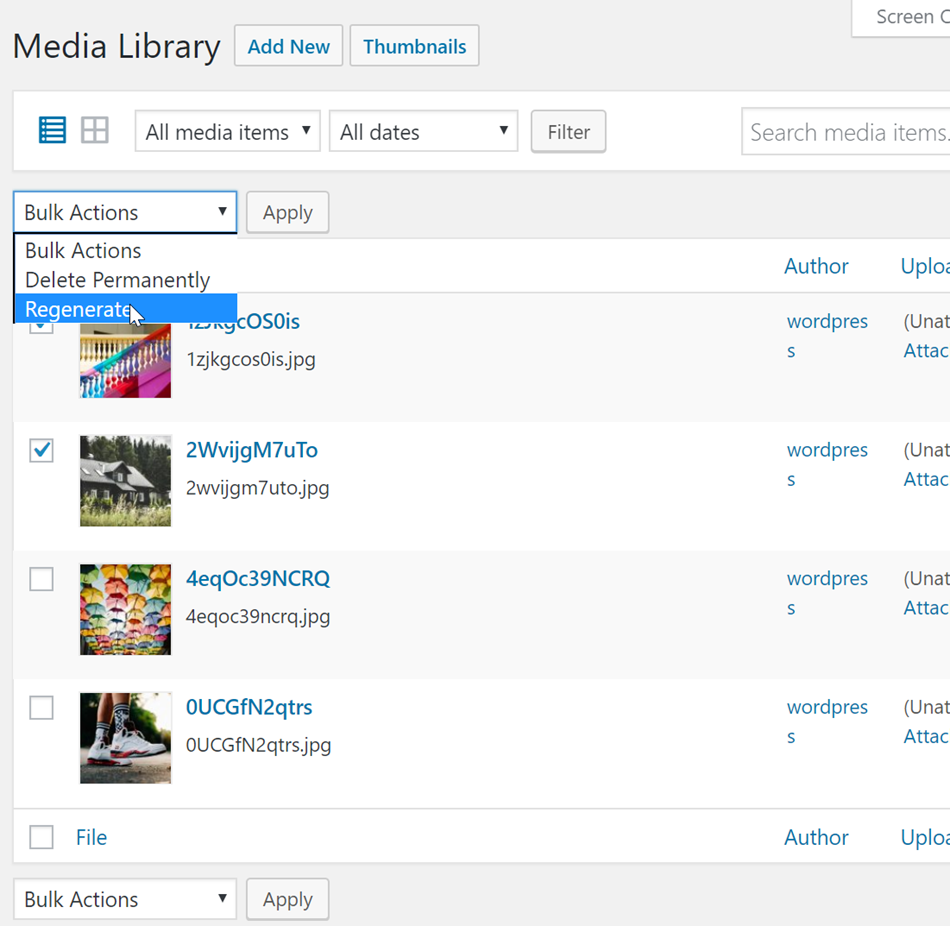