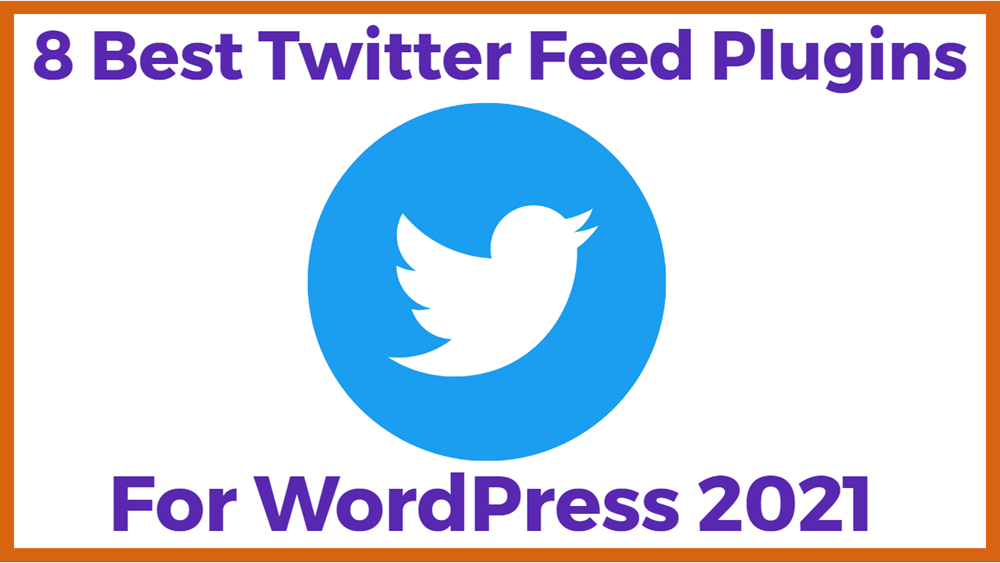 Are you looking for Premium or Free Best Twitter Feed Plugins for WordPress?  Twitter Plugins are the best way to show a live Twitter feed on your website.  And, finally at last we will be learning How to embed Twitter Feed in Widget. To increase your website social interaction and followers.

In this article, we will learn both methods of how to embed Twitter feed using the plugin and Without plugins too. Let’s look at some best WordPress Twitter feed plugins.

Custom Twitter Feeds is one of the best Twitter plugins for WordPress. It has a lot of customization options and users can use it to make it match the look of their website. It is very responsive and helps to display the search engine crawlable version of the Twitter feed on the website.

GS Feeds for Twitter plugin helps to increase the user’s social reach one step ahead. Using this plugin real-time Twitter feeds can be displayed anywhere on the website using shortcodes and widgets. It allows the tweets to displayed as feed or in the slider. This plugin store tweets in the form of cache without redirecting your website at Twitter.com for loading every page.

Recent Tweets Widgets comes with the cache. It stores the tweets in cache while using the latest Twitter API v1.1. It helps the user from preventing to be rate limited by reading the status message from the database and for every page load doesn’t query Twitter. Users can also set the time slots to update the cache

Recent Tweets Widget provides the continuity of visitors to the website through displaying the posts according to their interests. This plugin allows you to set up the prior updates that you want to occur accordingly. To add this plugin, you have to go through the simple steps and takes a little time to install. Through copy and paste some codes, you will able to embed your Twitter timeline on your site that is much effective in organic engagement.

WP to Twitter plugin helps to get strong Twitter integration on the user’s website and hence up his social reach. It is an amazing and exclusive WordPress plugin.

Customize Feed for Twitter Plugin is a way to display the actual Twitter feeds on the website of WordPress by using short-code or widgets. You may customize the Twitter feed of your website along with good response and crawl-able search engines. The ability to customize Twitter widget is accessible by application of custom height, on/off tweet reply, the colour of URL link, and etc.

Customize Feed for Twitter plugin contains both features i.e., free features and premium too. In the free feature, you get access to basics such as control layout, display tweets that you want to, settings for customizing widget, add follow buttons, and others. While in Premium, you are able to access advanced features comprising display tweets in the slider, Update Status, Option for load more tweets, settings for tweet style, and many more. Easy to install in just a few steps and provides a user-friendly interface that can be owned by anyone. And for the best experience, you must acquire the premium version where you get access to advanced features.

Better Click To Tweet plugin uses shortcodes to create tweetable content for readers. Not just contents, it also highlights the selected text and makes them tweetable. It uses an official shortcode API and is translation ready.

URL can be removed from the resulting tweet. And the best part- it is fully customizable.

Easy Twitter Feed Widget does not create an API but instead uses the Twitter widget to display tweets on the WordPress site. Even Twitter applications need not be created.

Tweets can be implemented in an easy way through their elegant interface. It also helps to display the Twitter timeline on the blog’s sideline without bells and whistles. Background colour, colour, border colour and many more options can be easily customized.

Tweets can be blended professionally along with any WordPress theme. 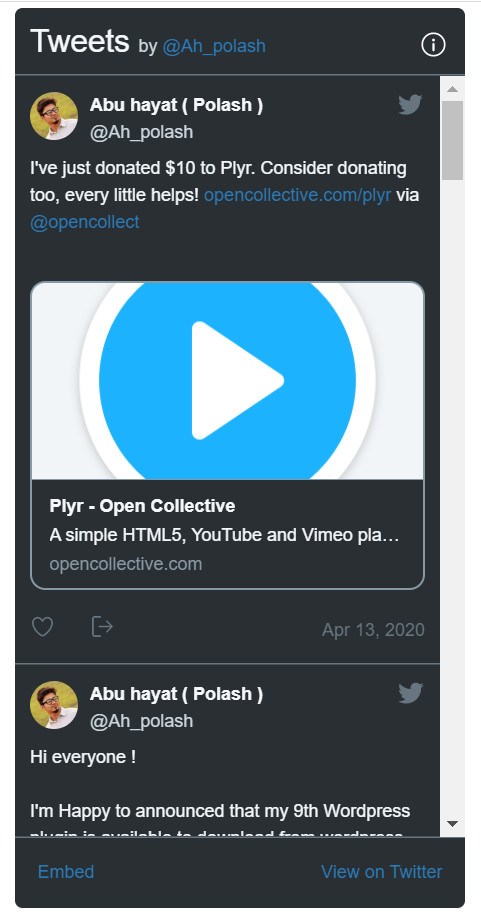 Good Old Twitter Feed Widget is a Plugin present in a sidebar widget that shows the latest tweets. Hereby, you can easily customize the replies, retweets, style, links, thumbnails, and more. This plugin completely based upon Twitter API Version 1.1 and before using it you have to create a Personal Twitter Application on the website of dev.twitter.com. 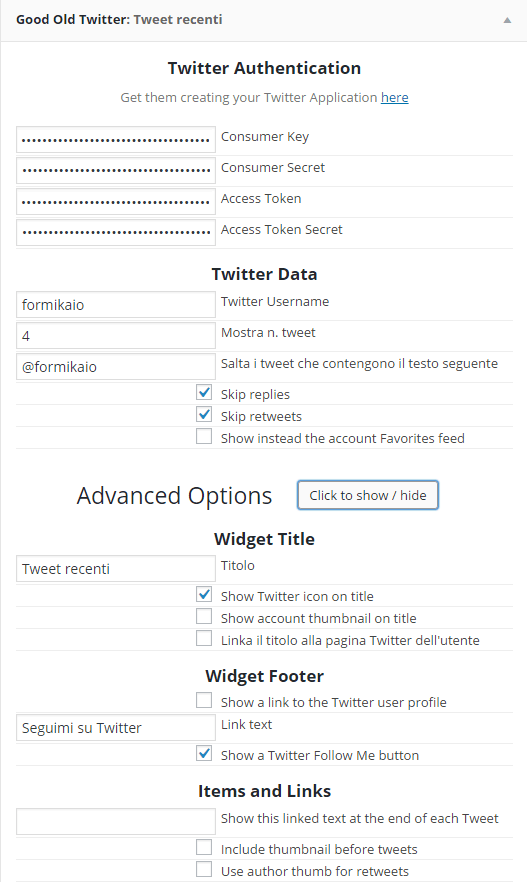 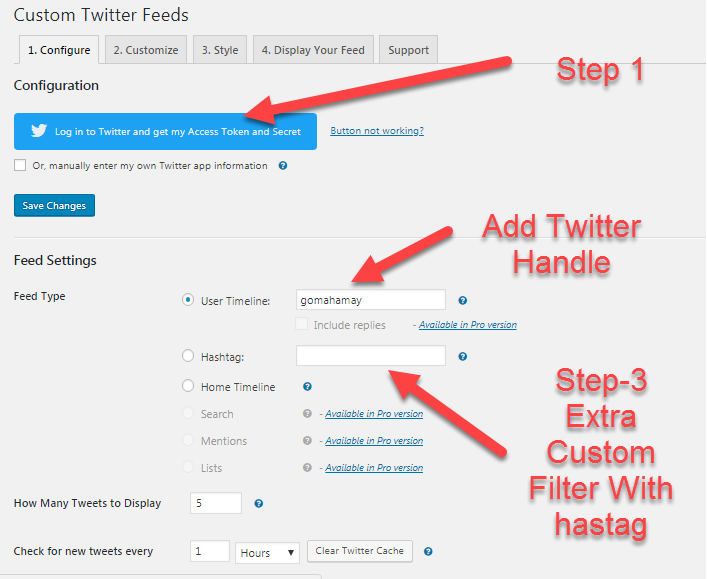 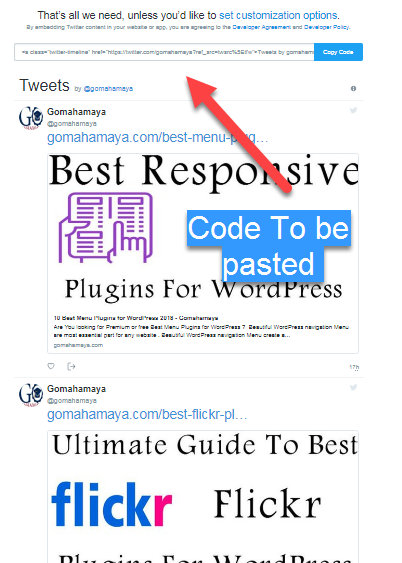 Finally, in the last, we can conclude that we learnt so many things in this article like how to add a live Twitter feed on WordPress Website by using Plugin and without Plugins too.

Conclusion – Still confused about which is the Best Twitter Feed Plugin WordPress? Don’t worry I will make it simpler for You. No matter You want a free version or the Premium version for both versions Custom Twitter Feeds by smush ballon is awesome. Still have questions, Feel free to ask me in the comment section or email me.